The word “anarchism” doesn’t suffice to cover all the rational attempts to theorize revolution.

It designates the tendency to reject a vision of the world organized by states, and to question the tribal foundation of the nations subject to revolutionary movements. 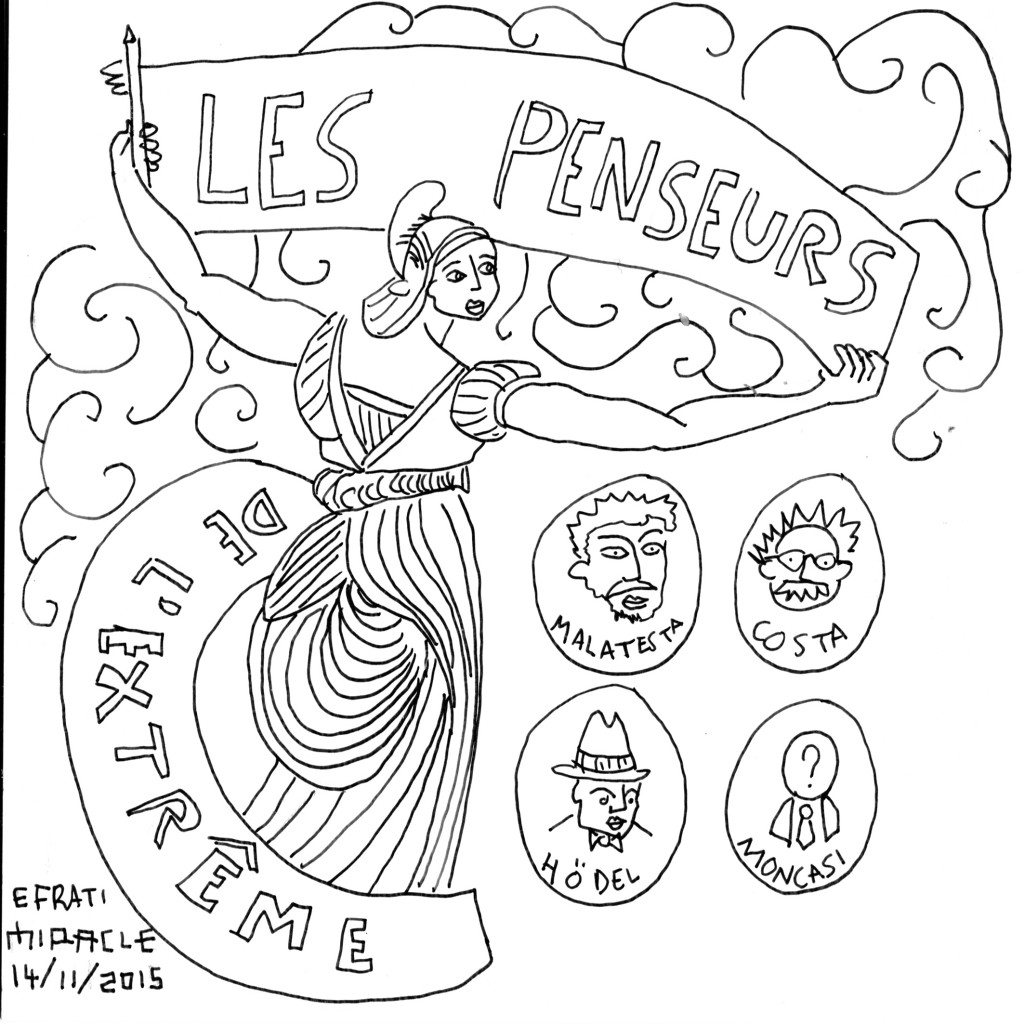 Title: “Thinkers of the extreme” 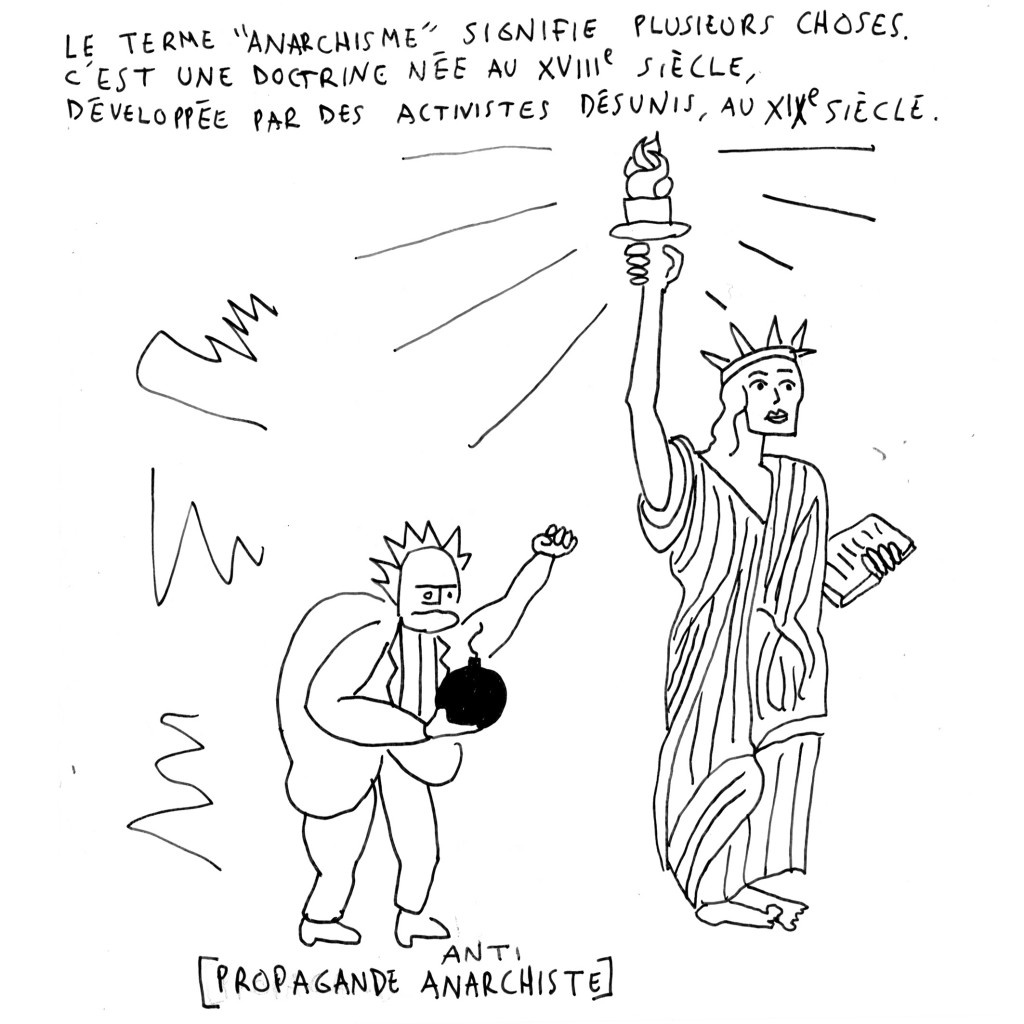 The term “Anarchism” means several things. It is a doctrin born at the end of the 18th century, developed by disunited activists  during the 19th century 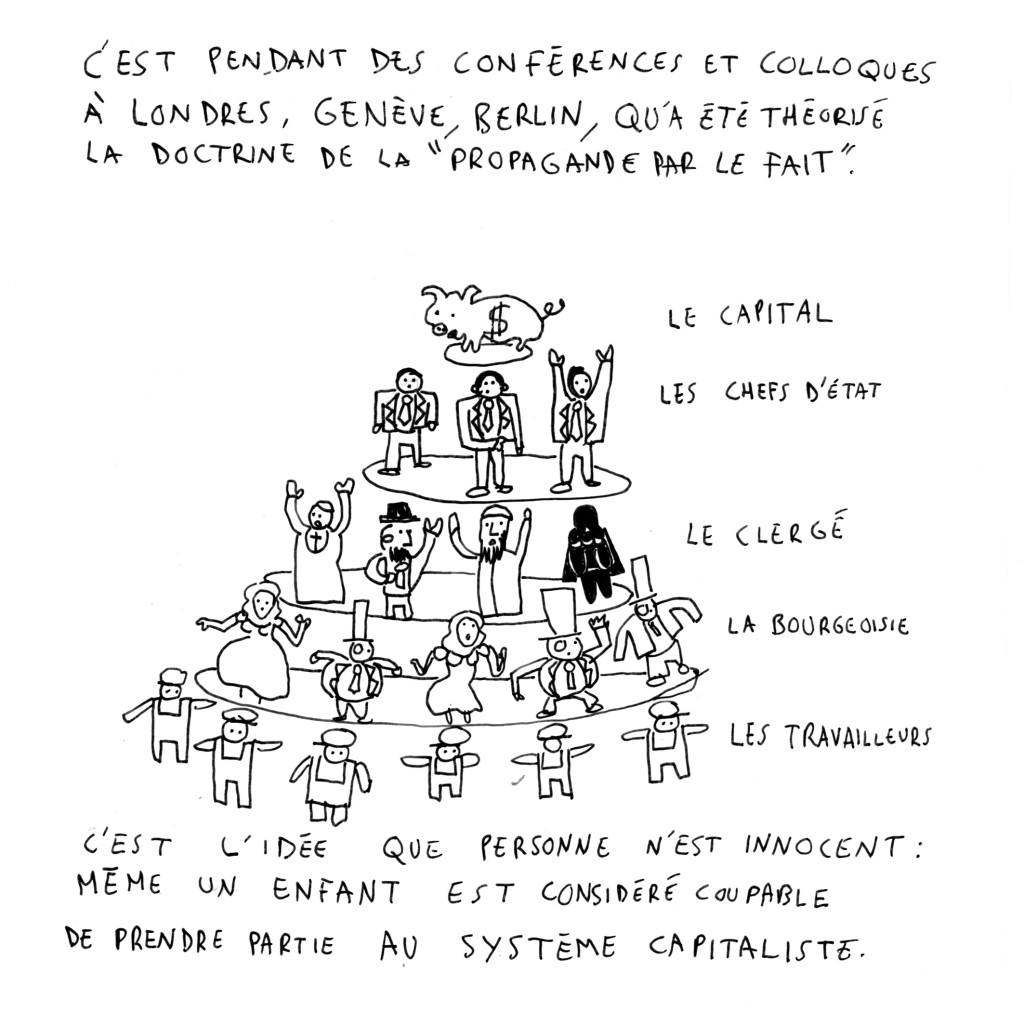 It is during conferences and symposiums in London, Geneva, Berlin, that the “propaganda of the deed” theory {which justifies killing “innocent” people as part of the act of protesting}. It is the idea that nobody is innocent: even a child is considered guilty of taking part in the capitalist system.

(picture shows pyramid, from top down: the capital, the state leaders, the religious leaders,  the wealthy bourgeoisie and the poor workers.) 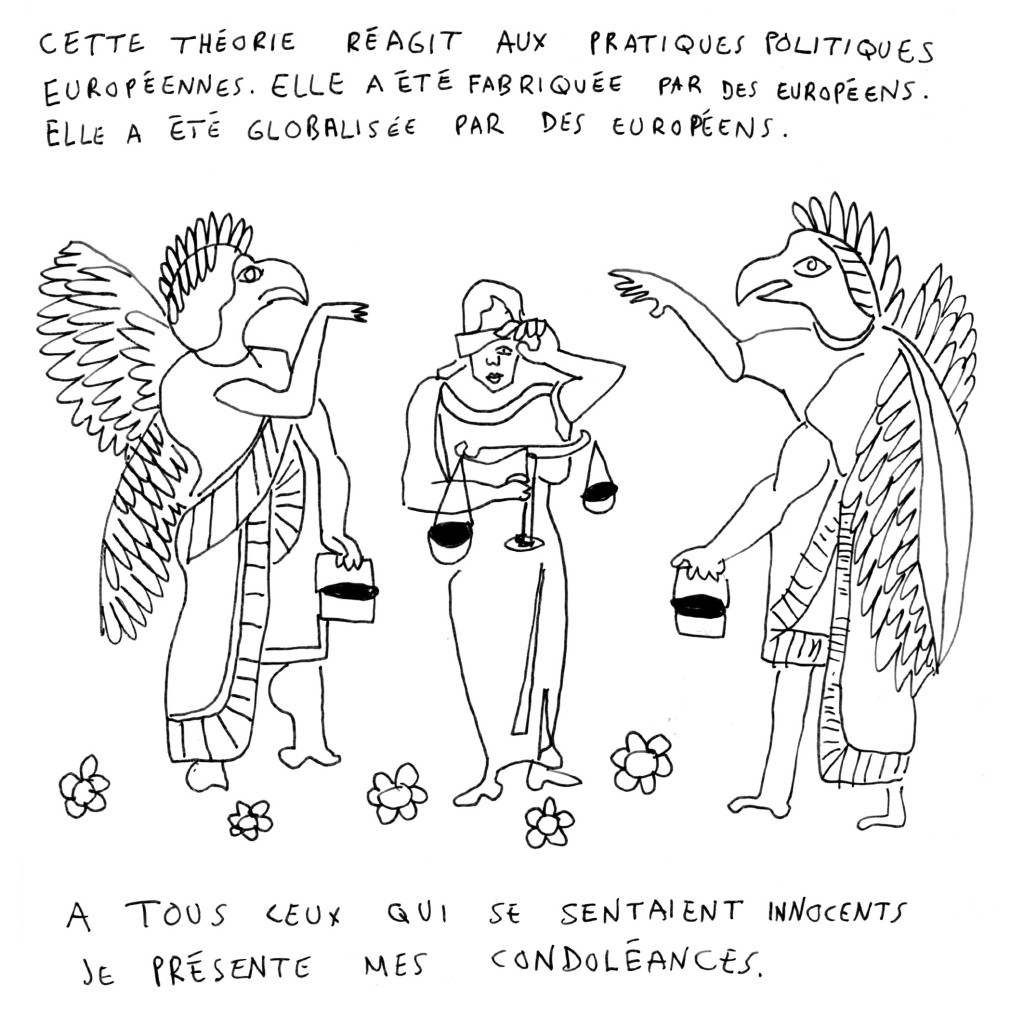 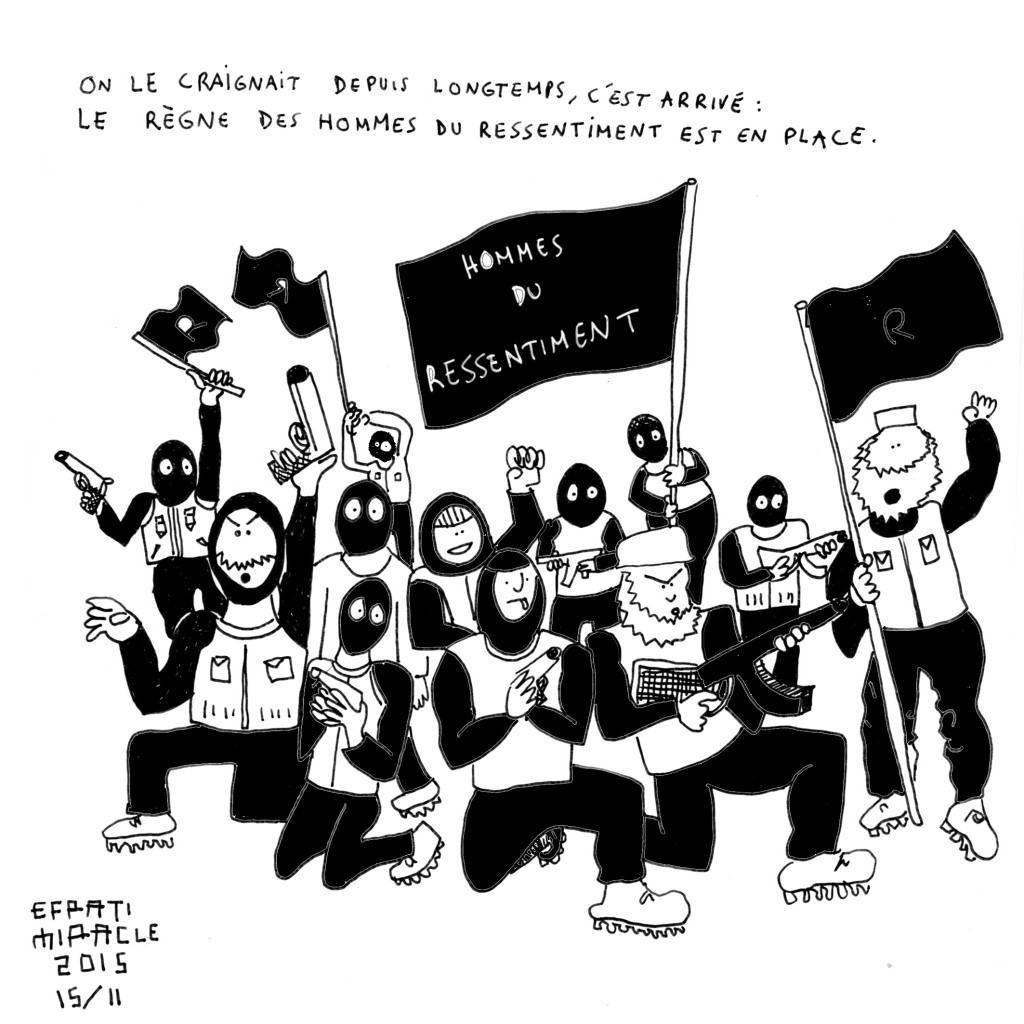 We feared it for a long time, it has happened: the reign of the resentment-men is in place.
(picture showing cheering resentment-men) 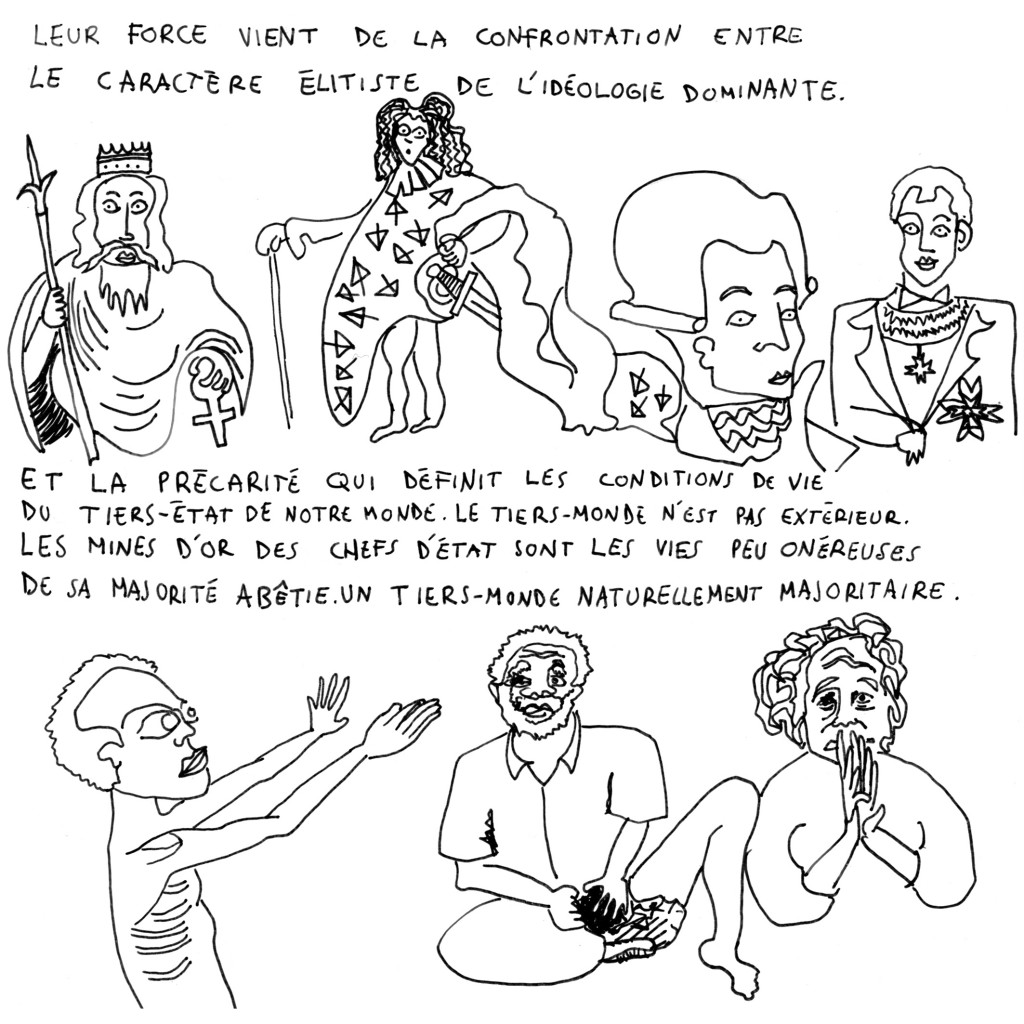 Their strenght comes from the confrontation between the elitistim in mainstream ideology and the precariousness which defines living conditions in the third-state of our world. The third-world is not outside. The mines of gold of state leaders are the cheap lives of the mesmerized majority. A third-world which is by nature majority.

(picture shows european aristocrats and people who look like they’re not in good shape, sort of) 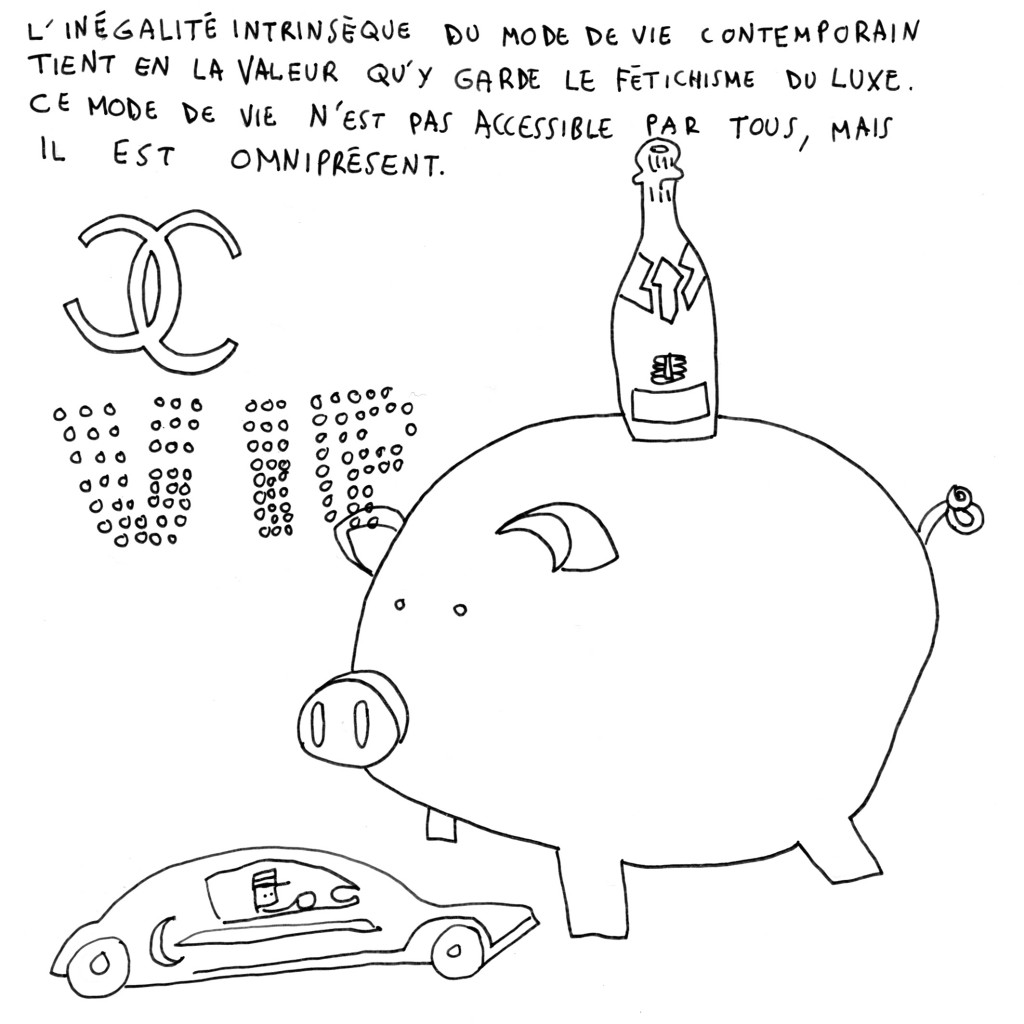 The intrinsic inequality of the contemporary lifestyle holds thru the surviving value of the fetish cult of luxury. This way of life is not available to all but is always present {to mind}. 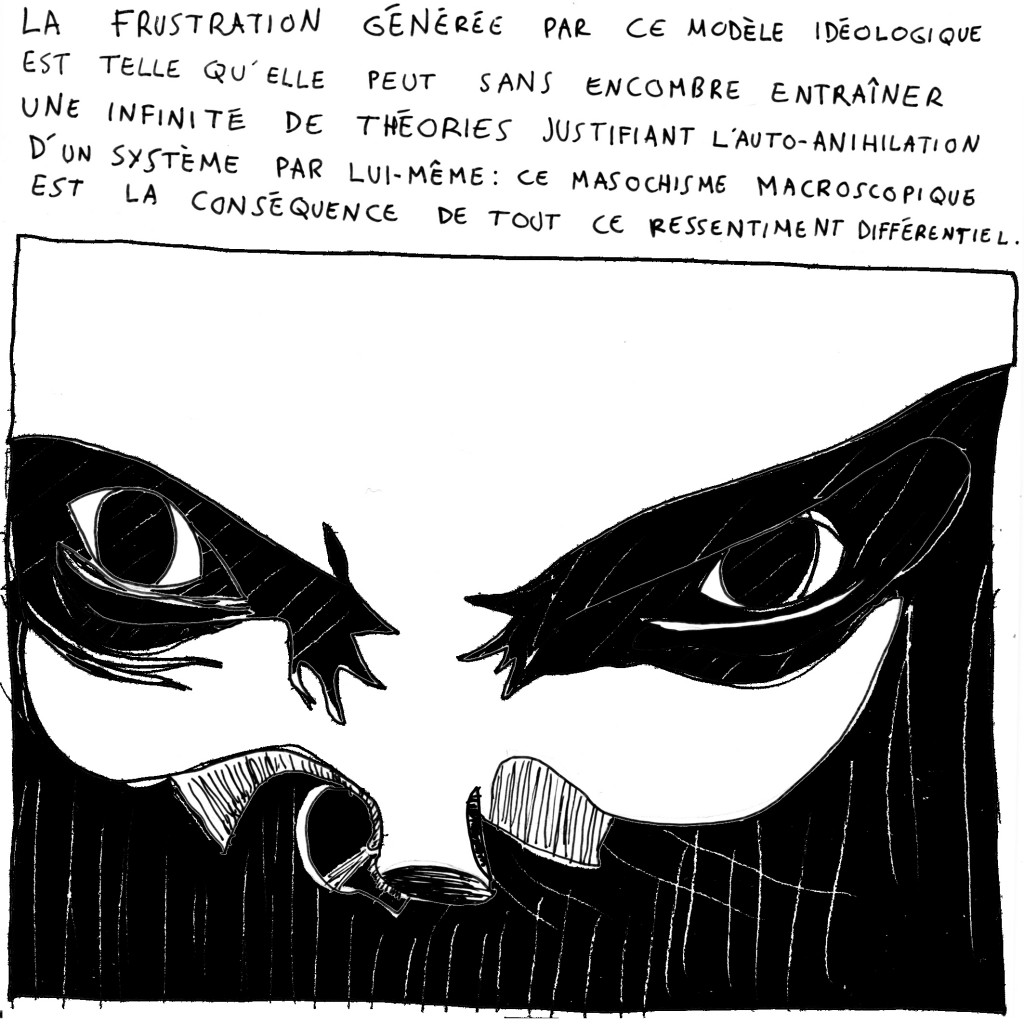 Frustration generated by this ideological model is such that it can without trouble contribute to sustaining an infinity of theories justifying the anihilation of a system by itself. 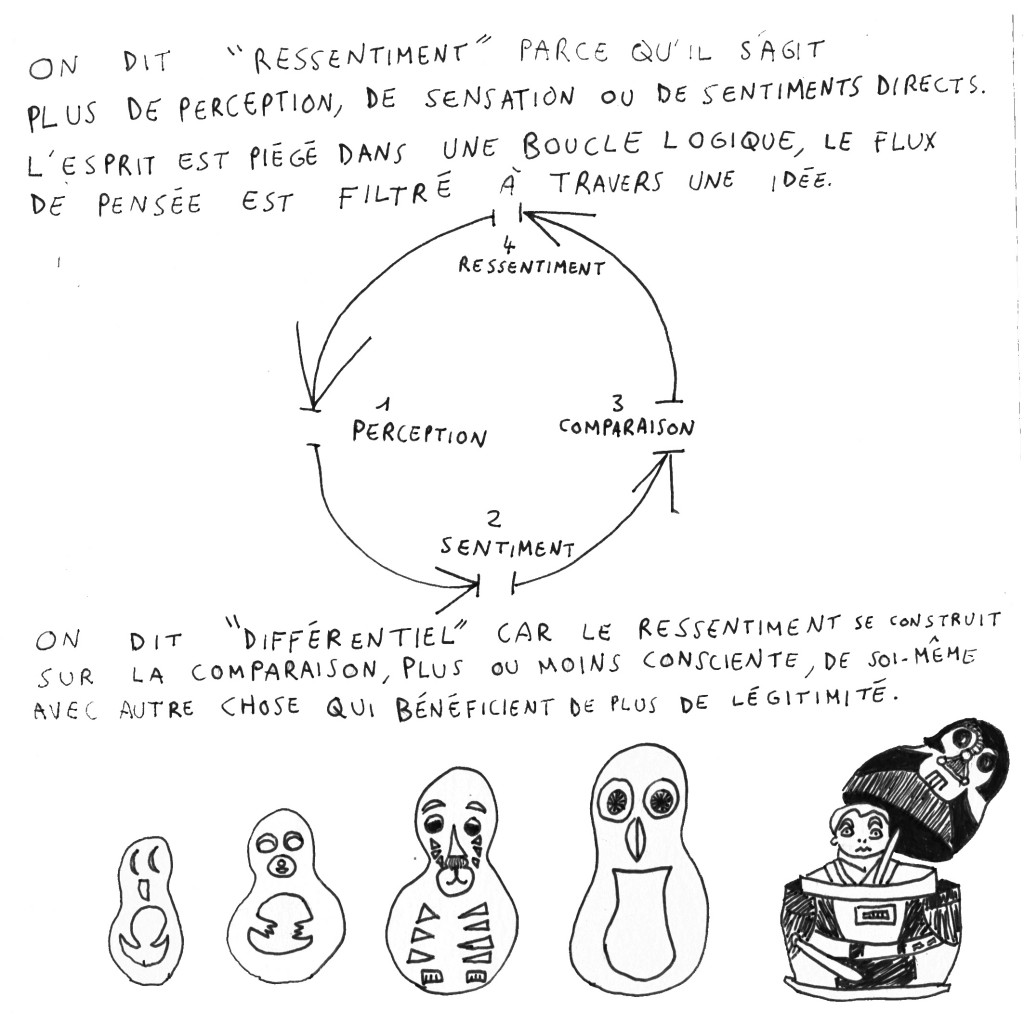 We say “resentment” because it is not a matter of perception, of sensation, or of direct emotions. The mind is trapped in a logic loop, though fluxus is filtered through an idea.

We say ‘differential’ because resentment is built on comparison, more or less consciously, of the self with some external object which withholds more legitimacy. 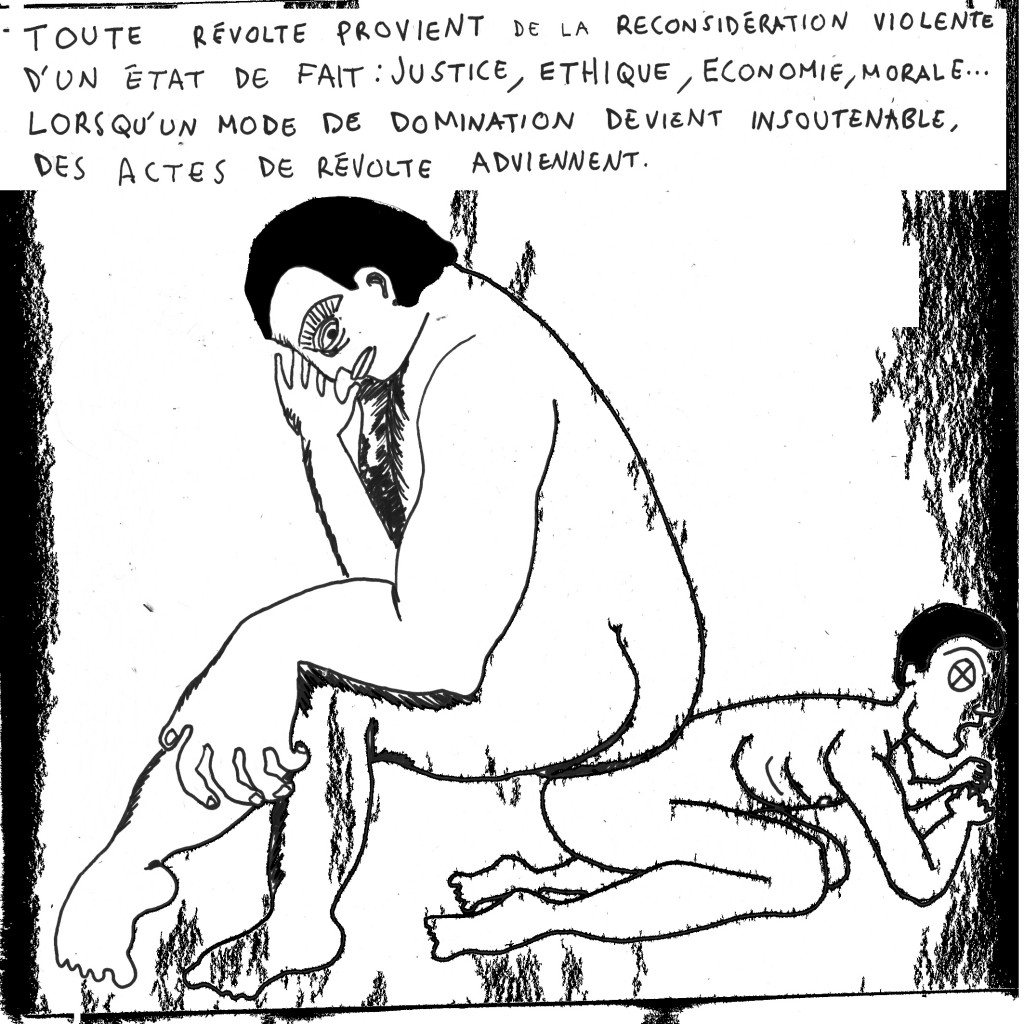 All revolution comes from the violent reconsideration of observed facts in terms of justice, ethics, economics, morals… When a domination mechanism becomes unbearable, acts of revolution appear.

(picture shows  guy sitting on another one) 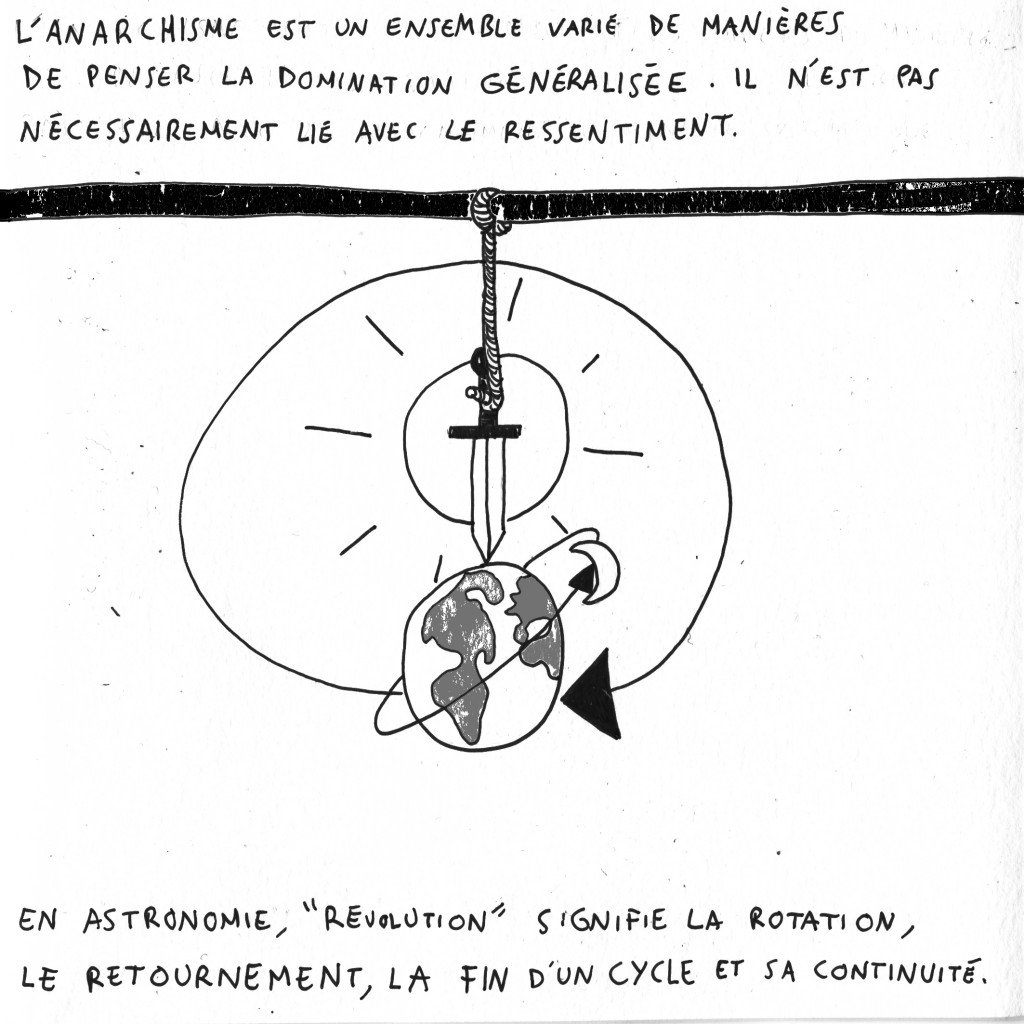 Anarchism is a set of ways of thinking global domination. It is not necessary linked to resentment.

In astronomy, “revolution” signifies rotation, turn, the end of a cycle and its continuity. 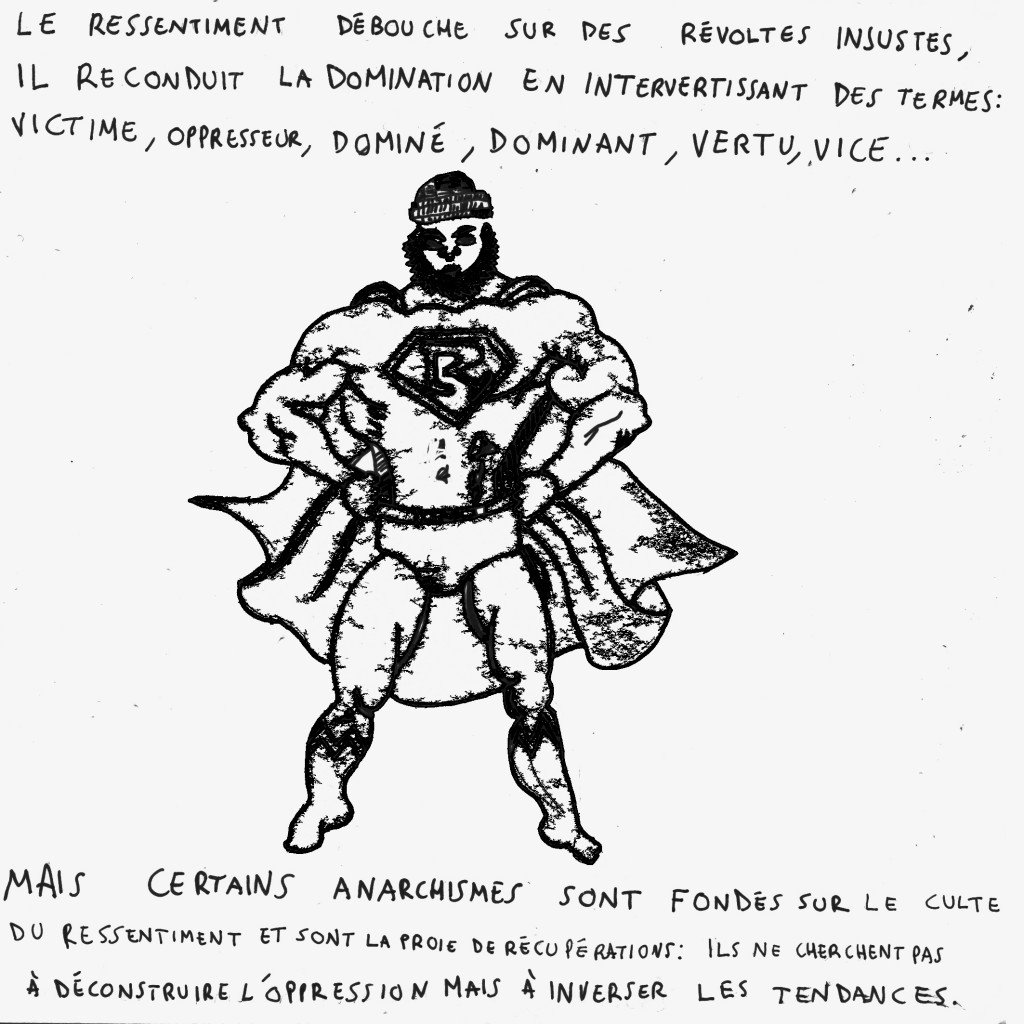 But some anarchisms are based on the cult of resentment and are easy prey to recuperation. {These anarchisms} do not seek to de-construct oppression but to revert its tendences. 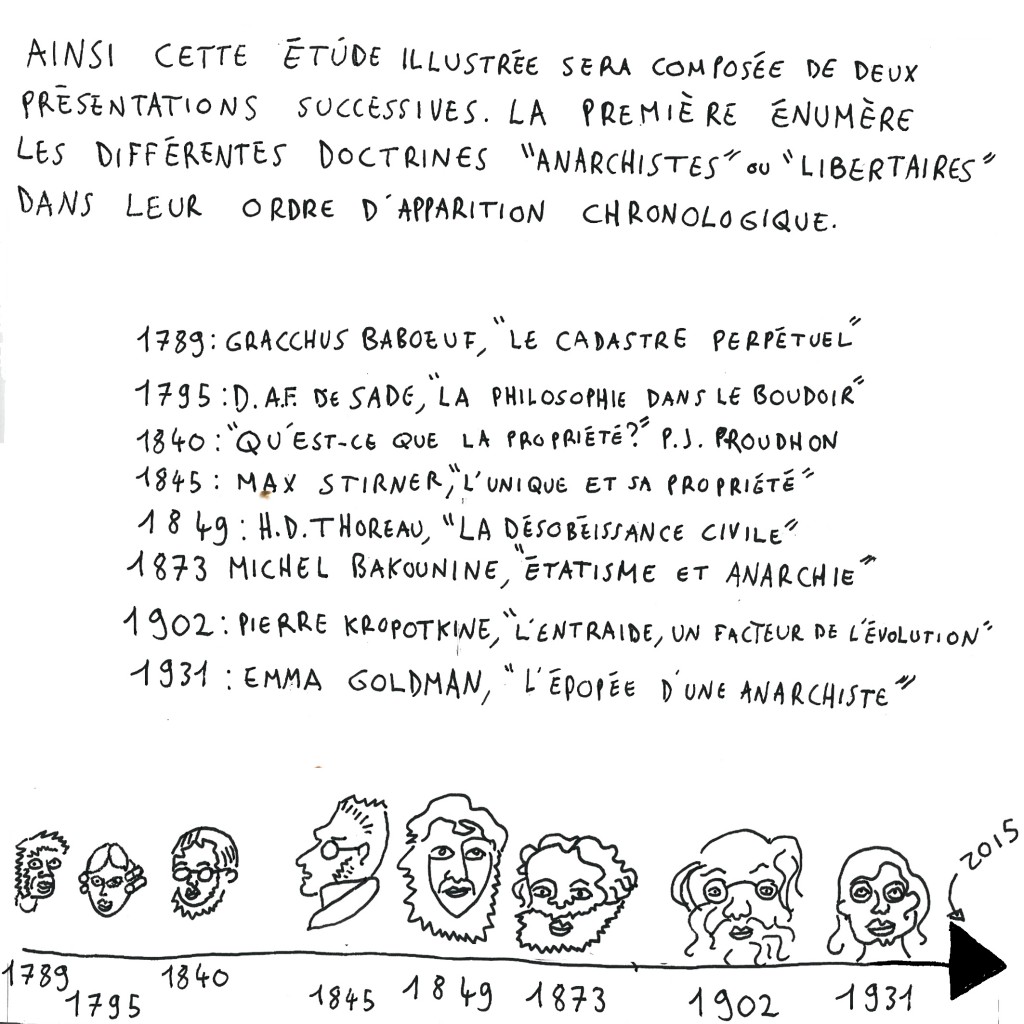 Thus, this illustrated study will be composed of two successive presentations.
The fist on enumerates the different theories known as “anarchist” or “libertarian” in chronological order of appearance: 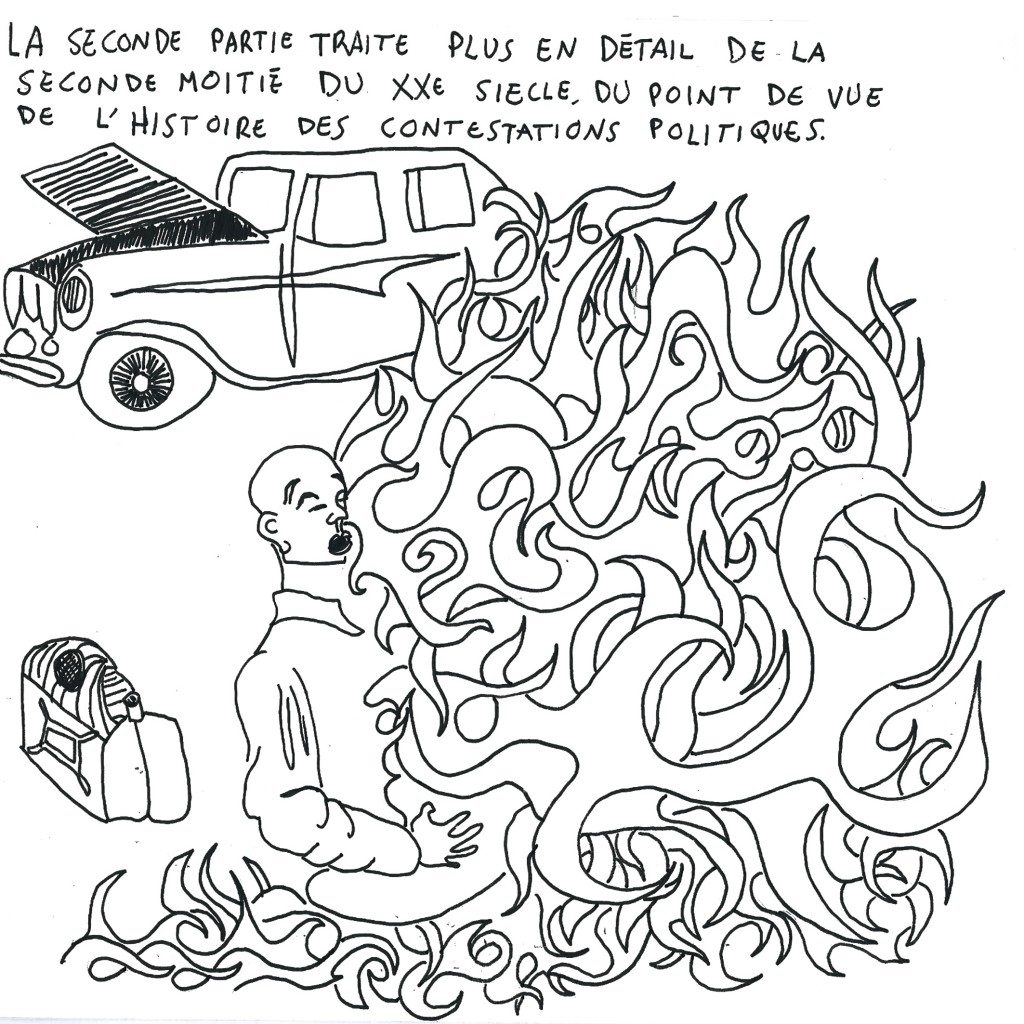 The second part describes in detail the second half of the 20th century, from the point of view of the history of political contestation.

(picture showing man burning to death on his own accord) 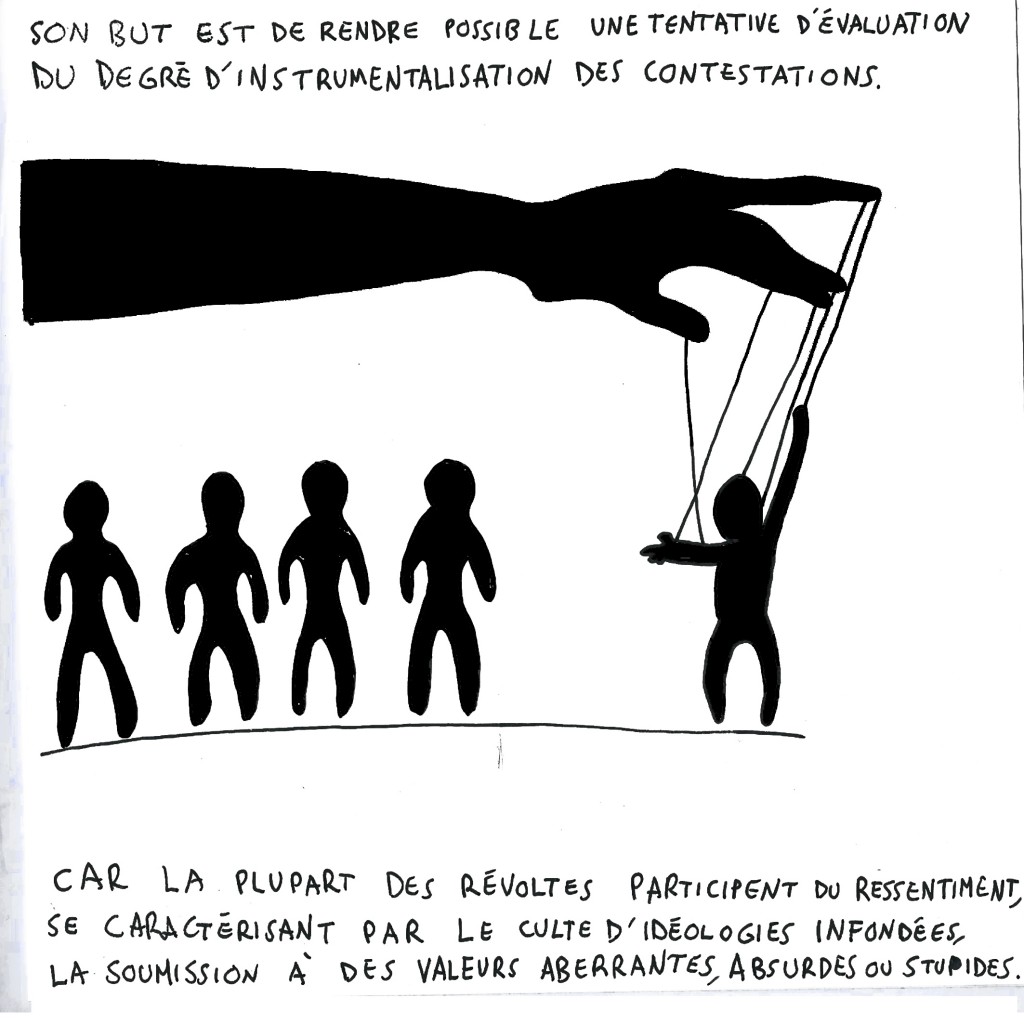 Its goal is to make it possible to evaluate the instrumentalisation at work in contestation.

For most of the revolutions work with resentment and abide to the cult of unfounded ideologies, as well as submit to illogical, absurd or even stupid values. 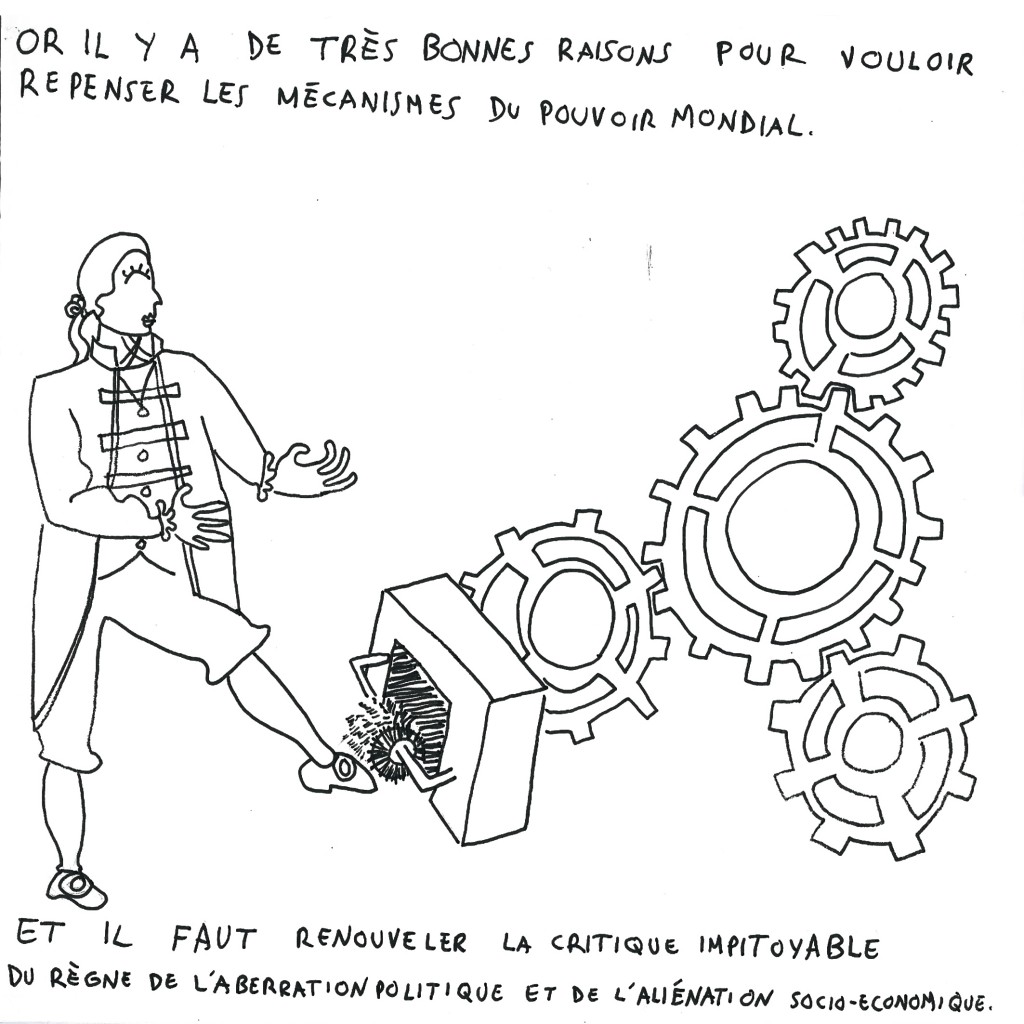 Yet there are very good reasons to criticize and redesign the mechanisms of world power.

We must renew the unforgiving criticism of political aberration and socio-economical alienation.

(picture shows silly aristocrat getting his shoes cleaned by a very complex machine.)

note: alienation is a marxist word; it means the people who do all the work have no idea what they’re working for 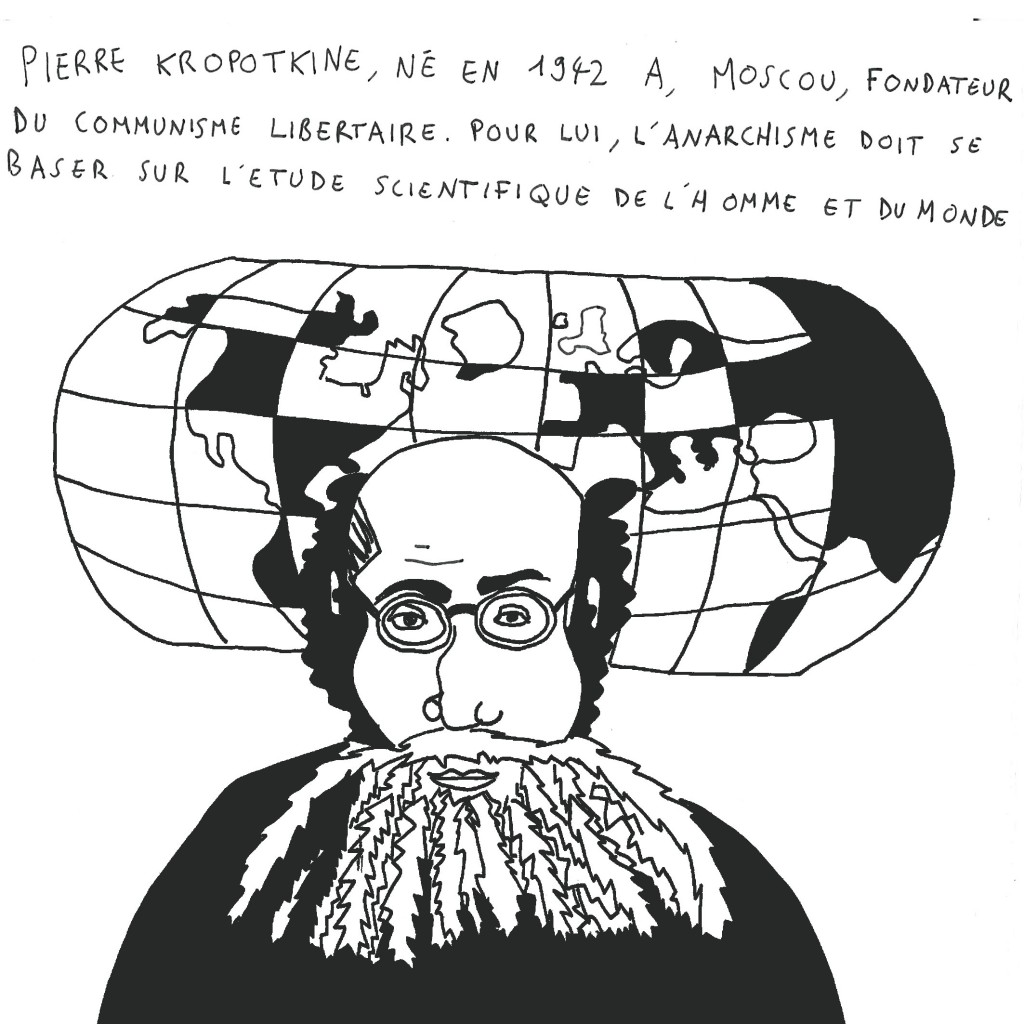 Piotr Kropotkine, born in 1842 in Moskow, founder of libertarian communism.

For him, anarchism must be based on the scientific study of man and the world. 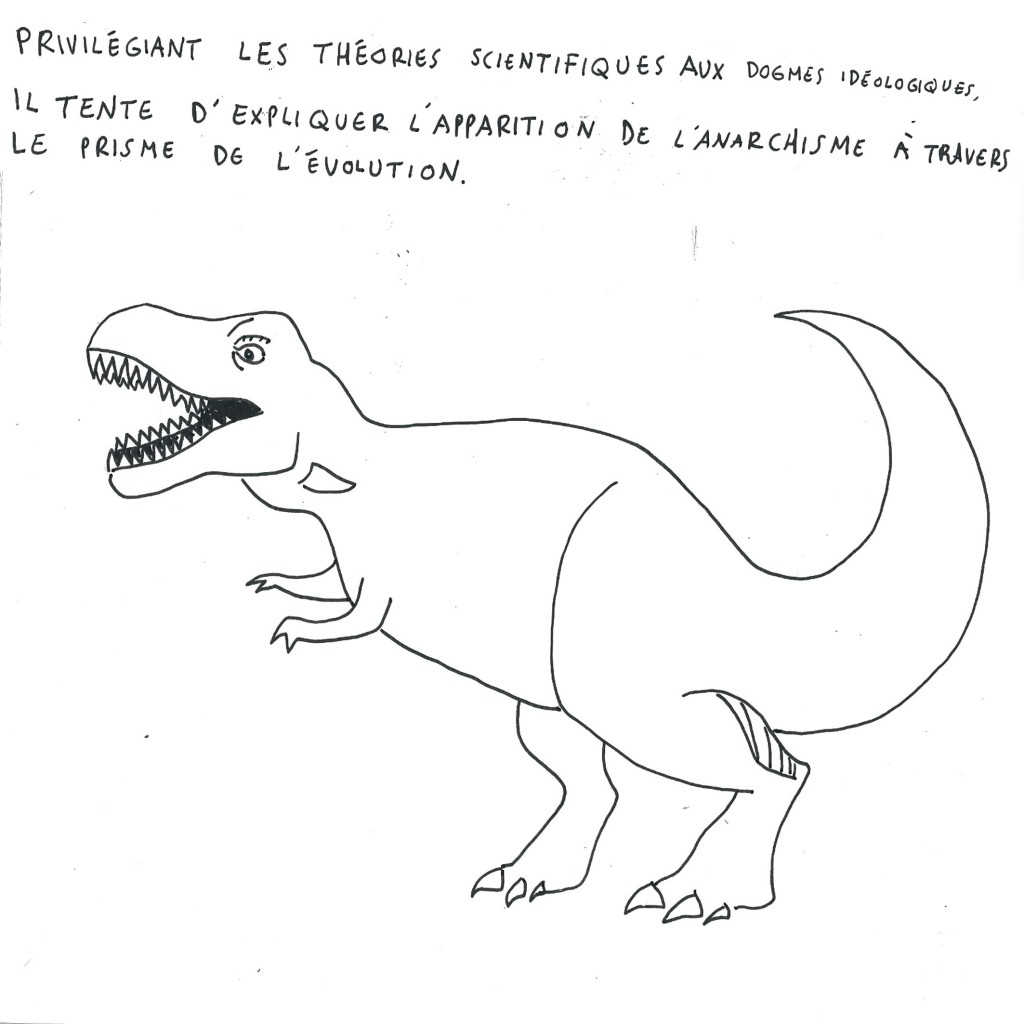 Preferring scientific theories to ideological dogmas, he attempts to explain the appearance of anarchism through the prism of evolution. 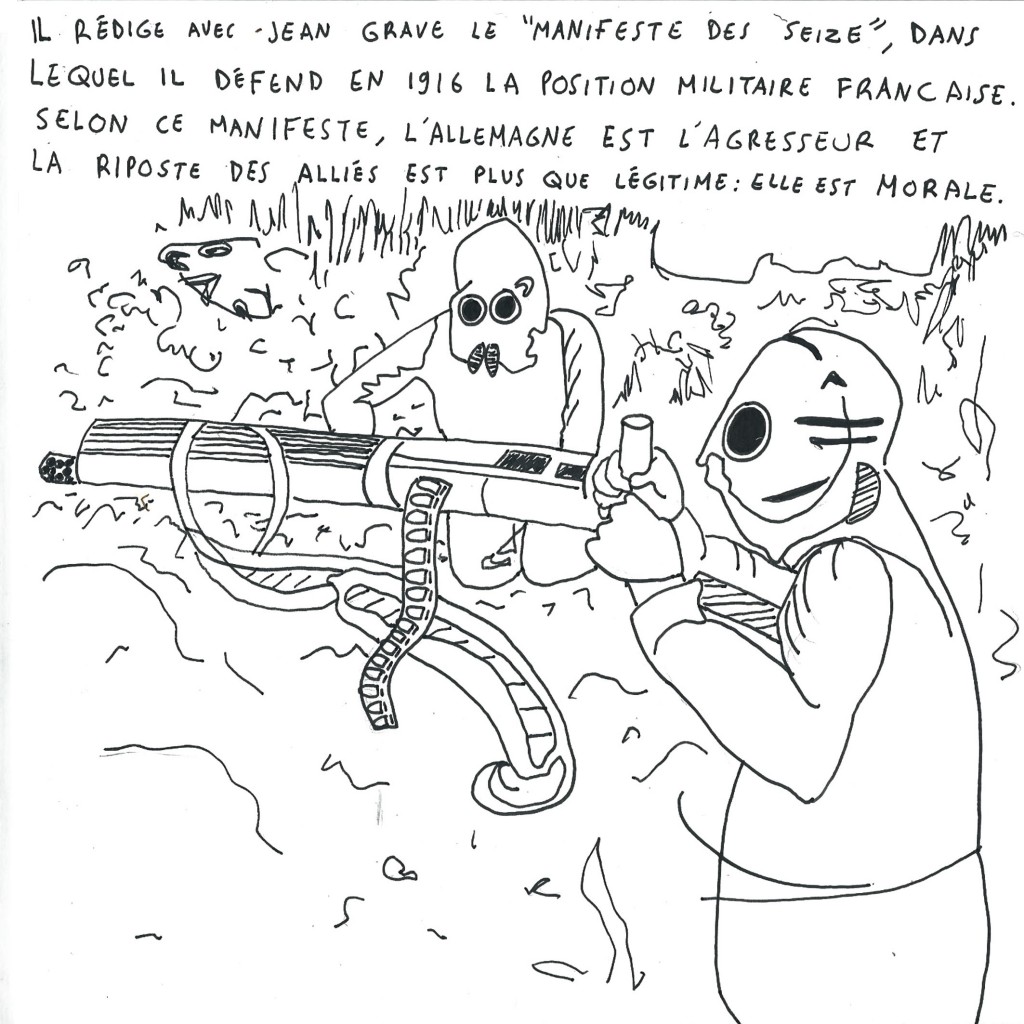 With Jean Grave, he is the author of the Manifesto of the sixteen, in which he defends in 1916 the military position of France. According to this manifesto, Germany is agressing the other party. Strikeback from the Allies is more than legitimate: it is moral. 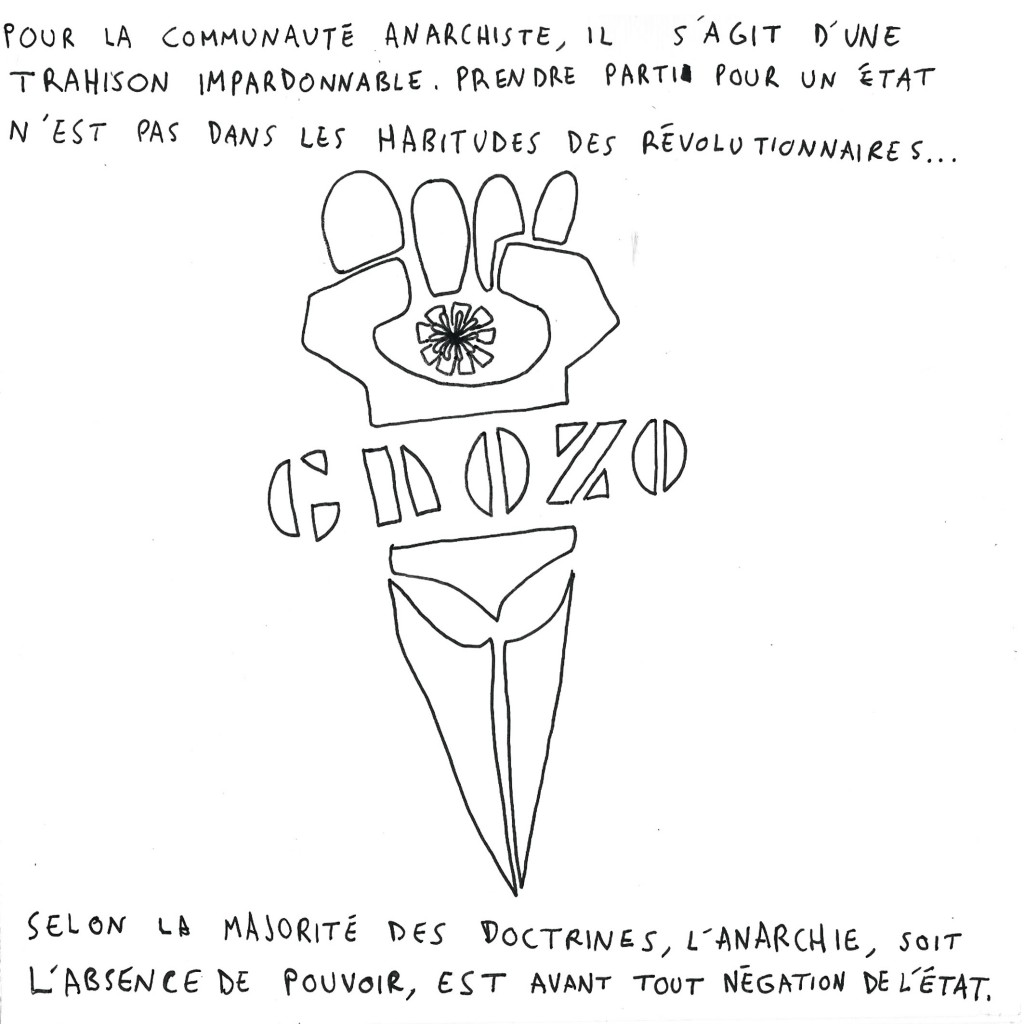 For the anarchist community, it is an unforgivable betrayal.

Taking sides with a state is not in the habits of the revolutionary.

According to most of the theories, anarchy, being the absence of power, is before anything else pure negation of the concept of state. 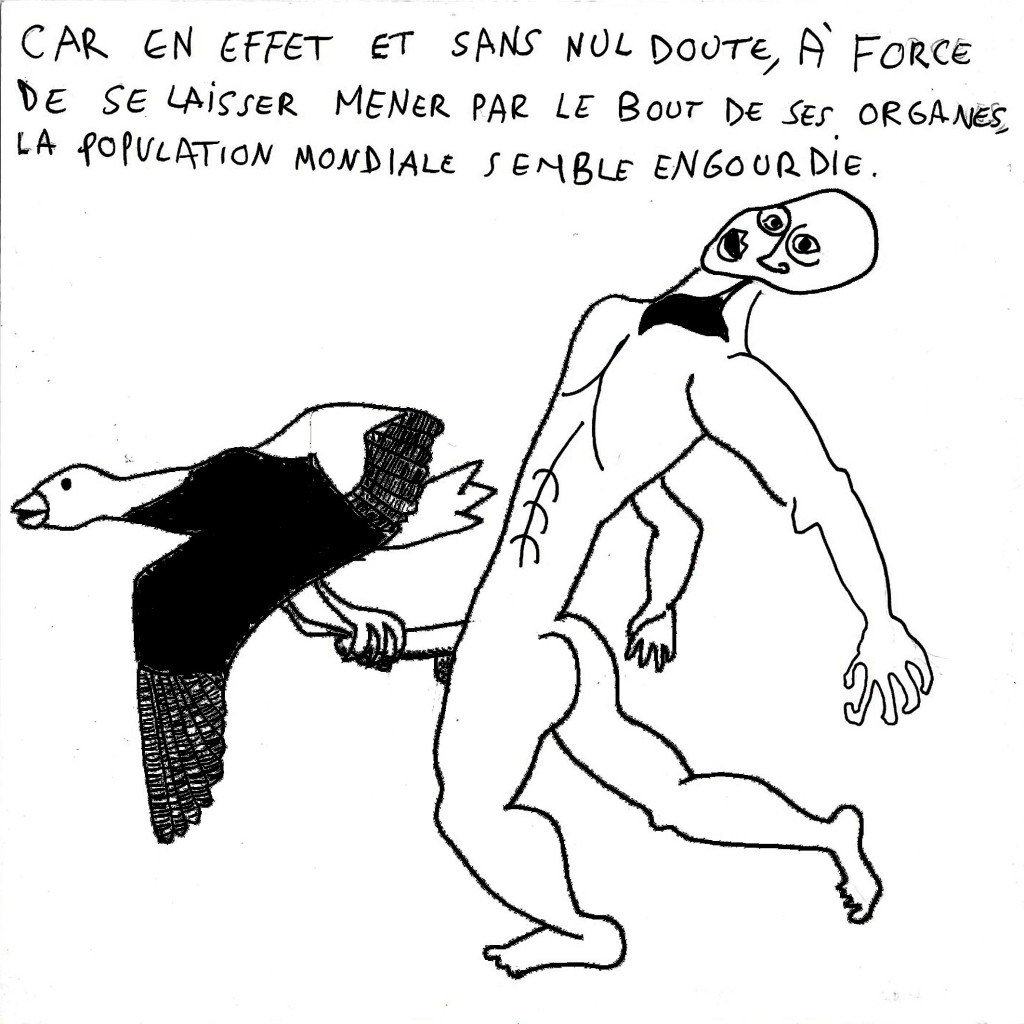 Indeed and without a doubt, the consequence of letting themselves be led by the tip of their limbs, the world population seems to have become numb. 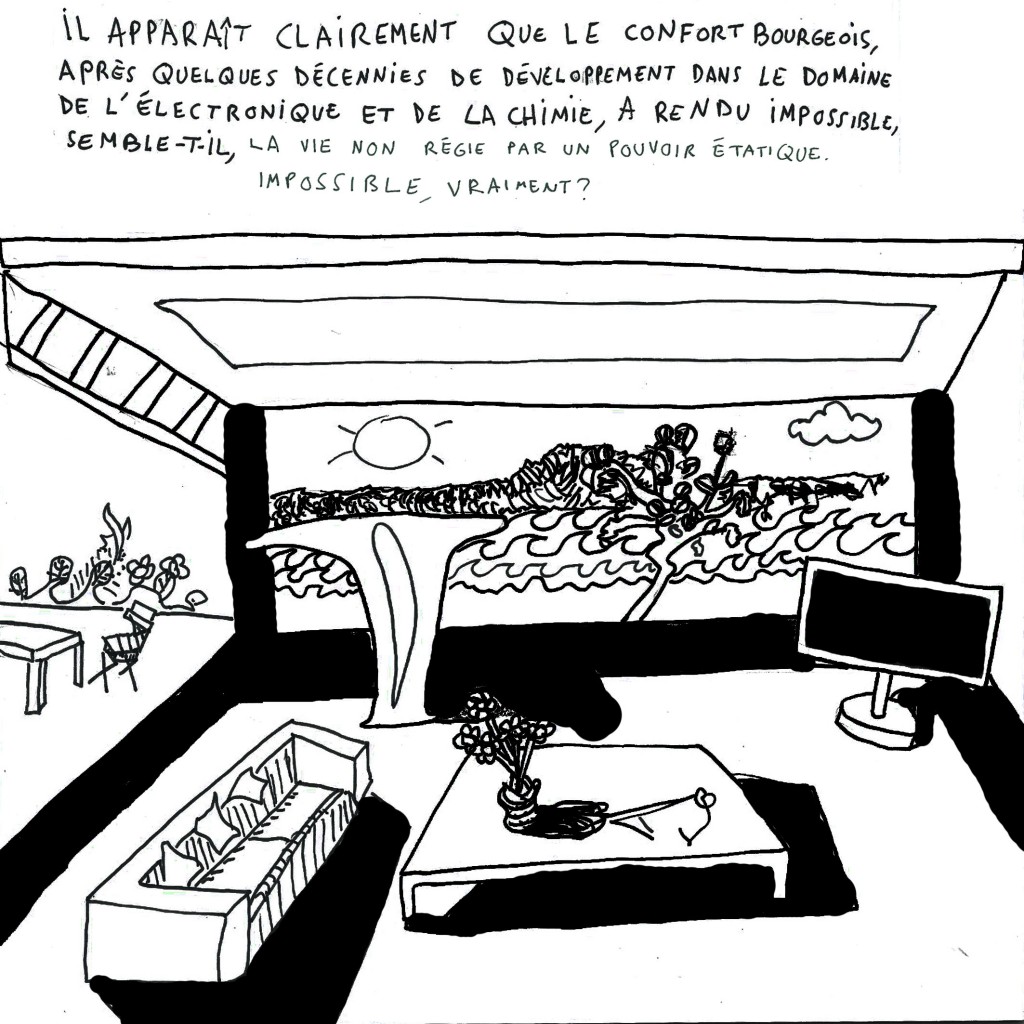 It appears clearly that bourgeois comfort, after a few decades of development in electronics and the chemical industry, has rendered impossible life independant from state power.

But is it really impossible? 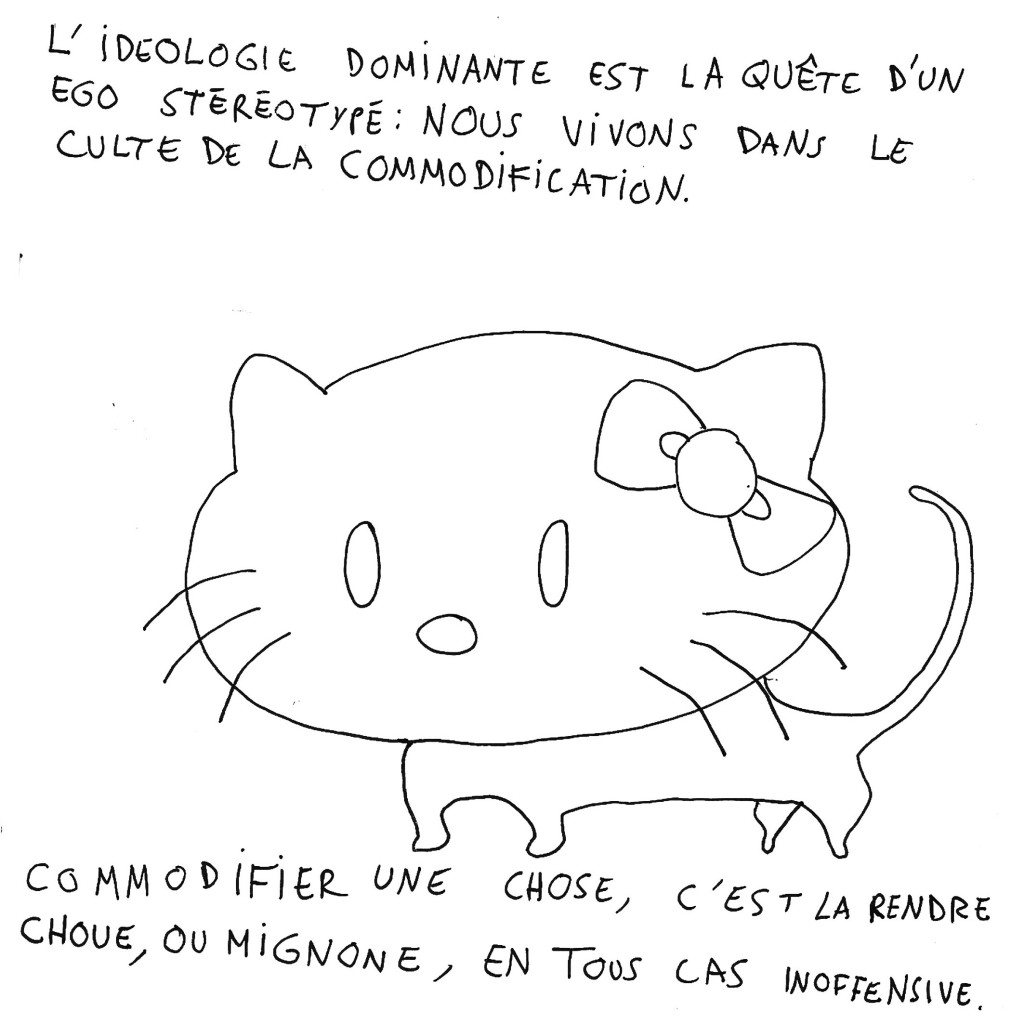 The dominant ideology is the quest for a stereotyped ego: we live in the cult of commodification.

To commodify a thing, is making it cute, or nice, in any case harmless. 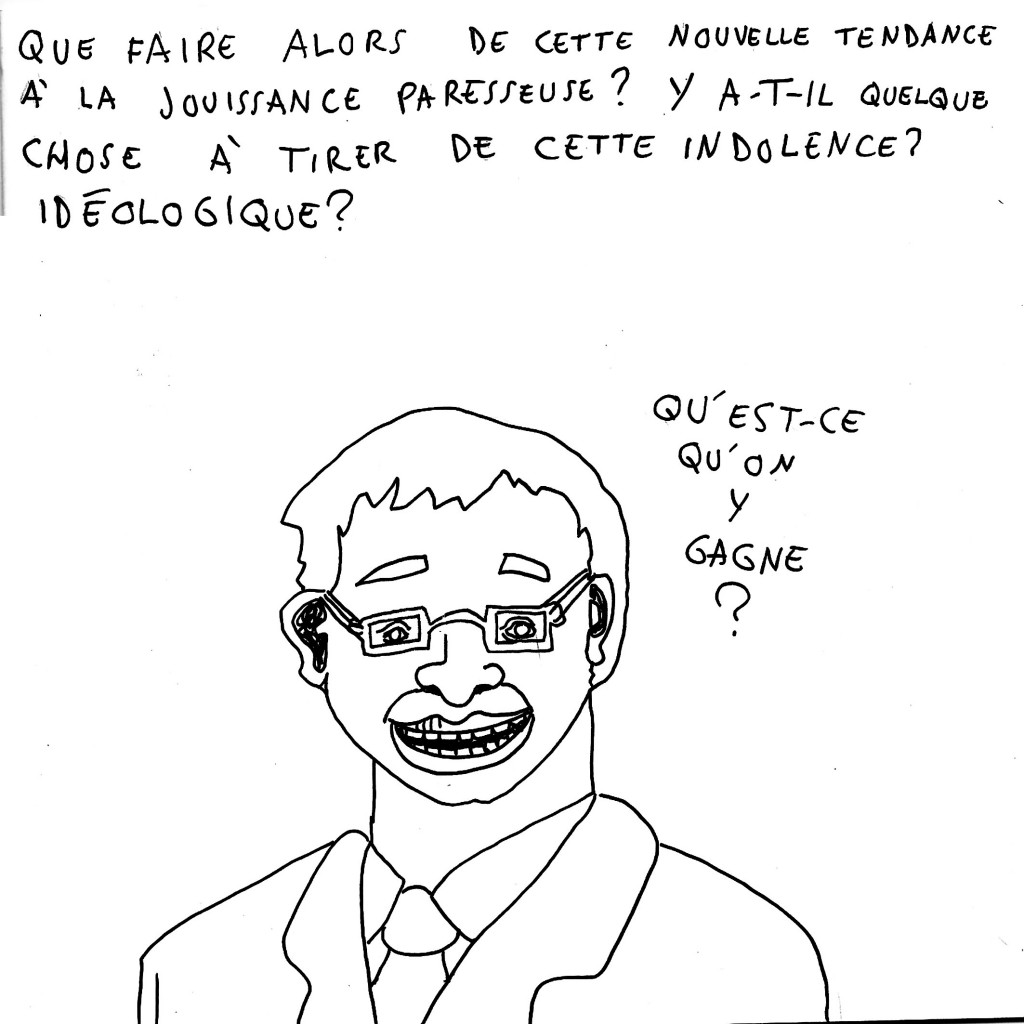 What then shall we do with this new tendency to lazy pleasure? Is there something we can gain from this indolent behavior?

(picture shows Bill Gates asking:  “What profit can we make of that?”)